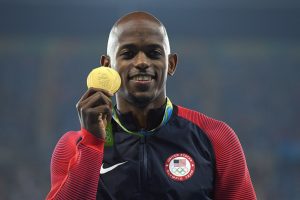 Henderson was brought into their rookie mini camp, and Andy Reid spoke about Jeff when asked.

“We’re proud of him for bringing home the gold,” Chiefs coach Andy Reid said. “I think he probably had his mind set on going to get the gold.

“He worked his tail off here, but [track] was probably his primary focus.”

The 5-foot-10, 187-pound wideout from Stillman College  would have had a hard time making a roster, but it is still pretty cool to see.

The team also announced that running back Jamaal Charles is now off the physically unable to perform list and will practice today. Charles tore his ACL in October, so it’s been about 10 months since he has seen the field.