Buccaneers have given Demar Dotson a multi year extension worth 16.5 million 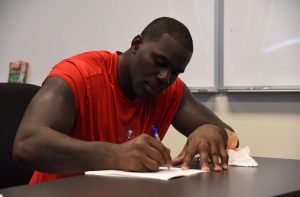 On Monday, the Buccaneers announced that they have extended the contract of offensive tackle Demar Dotson. Since signing with the Bucs as an undrafted free agent, Dotson has started 52 games for the Buccaneers. He will be holding a press conference at 11:30 a.m. ET to discuss his new contract.

He was signed by the Buccaneers as an undrafted free agent in 2009. He played college football at Southern Mississippi. He was born in Alexandria, Louisiana.