Broncos will start Trevor Siemian for week 2 of the preseason 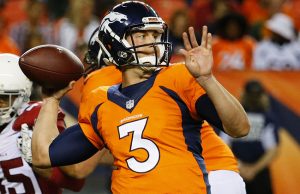 Sanchez, who started Denver’s preseason debut, went 10-of-13 for 99 yards, a touchdown and an interception. Siemian went 7-of-12 for 88 yards.

Siemian, a seventh-round pick in the 2015 NFL Draft out of Northwestern, has gained momentum throughout minicamp. Spending a year in Kubiak’s system last year has its advantages.