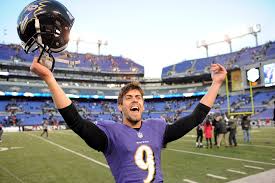 Justin Tucker has specialists blasting him hard ever since his comments

I love it when specialists are beefing. This might be the best news all week.  When Britton Colquitt was asked about Justin Tucker saying he can hit an 85 yard field goal in Denver, the punter blasted him, and his ways.

“I looked at that and I laughed,” Colquitt told Denver media members about Tucker’s statement to the NFL Network. “Let’s start here: Tucker loves Tucker. He loves himself so much, and I take it personally because Morgan Cox is [the Ravens] long snapper and he was my long snapper at Tennessee.”

Colquitt said that he doesn’t like the way Tucker celebrates his made field goals.

“If I was a kicker, the last thing I’m going to do when I make a field goal is sprint as far away from my holder and snapper, as he loves to do and just does some kind of dance. That drives me crazy,” said Colquitt, who holds for McManus.

Colquitt has advice for the Baltimore kicker.

“Anyway, Justin, I know you’re out there and you’re probably doing your opera thing or whatever, looking in the mirror,” he said. “Everyone knows you’re a great kicker, you don’t have to tell ’em.”