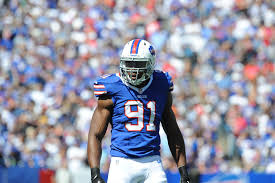 Manny Lawson says he knows nothing of a suspension

Buffalo Bills linebacker is reportedly facing a one game suspension from the NFL according to Tim Graham of the Buffalo News, but Manny Lawson himself and his agent are both denying the report.

The report from the Buffalo News said that Bills linebacker Manny Lawson is facing a possible one-game suspension from the NFL under the Personal Conduct Policy that stemmed from a domestic situation.

According to Pro Football Talk, both the agent of Lawson and Lawson himself said the report was not true:

Lawson also denied any domestic violence incident took place and said, via Vic Carucci of the Buffalo News, that he has “no idea” where the report of a suspension came from. Lawson, who was just activated from the non-football injury list after recovering from a pectoral injury, also said he contacted the NFL in an effort to get “to the bottom of it” but has not heard back from the league.

“The only thing that has happened this off-season is the pec,” Lawson said, via Sal Capaccio of WGR.

Tim Graham of the Buffalo News stands by his original post: