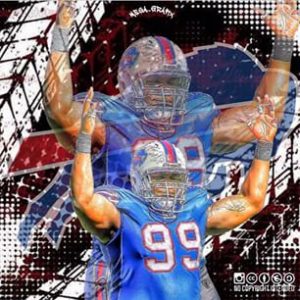 NFL Media Insider Ian Rapoport reported Tuesday that defensive tackle Marcell Dareus is facing a four-game suspension for yet another violation of the NFL’s substance abuse policy, according to a source. Dareus told reporters Wednesday he missed a drug test. The team confirmed the suspension via a statement.

Rapoport told NFL Network that the ban stems from “either failed or missed drug tests involving his use of marijuana,” noting that the Bills learned about the suspension just “two hours” before the public.

“I really don’t have much to say. Words don’t mean anything now. It’s all actions, now,” Dareus told reporters. “I’ve apologized to my team. My team loves me to death, they know what kind of person I am. They have my back.”

“I put myself last for the most part. It’s not about me. I sacrifice myself. No one is perfect,” Dareus said. “Talk is cheap. We can say anything. Y’all will see me when I get back.”

That came after the Bills made this statement:

“We are very disappointed Marcell chose to put himself first, before his teammates, coaches and the rest of the organization through his recent actions. From ownership down we have made it clear his behavior is unacceptable. We will continue to take the necessary steps to work with him in order that he adheres to the policies set forth by our league. As an organization, we will move forward with our preparations for the start of the 2016 NFL season in Baltimore on September 11.”