Bills lose Ik Enemkpali for the season to a torn ACL 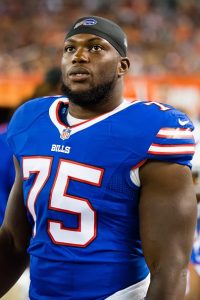 Bills could be without IK Enemkpali for the year

The Buffalo Bills are banged up right now at linebacker. They lost Shaq Lawson their first round pick for close to if not the entire year, they recently lost Reggie Ragland for the year, and now they suffered another loss at OLB.

The Bills will likely turn to Lorenzo Alexander to fill the void.

According to Ian Rapoport, Ik Enemkpali suffered a torn ACL.

Another bad blow to the D: The #Bills appear to have lost LB IK Enemkpali for the season with a torn ACL, source said. MRI coming to confirm