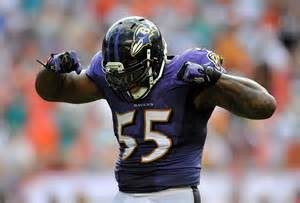 Today the Buffalo Bills and Baltimore Ravens made a move to make their teams better. The Bills finally activated their suspended running back Karlos Williams from the Non Football Injury list (overweight), which will help their ground attack out.

The Bills running game could be pretty amazing this year, but they will have some tough decisions when it comes to cut down time, after the play of Jonathan Williams and Mike Gilislee.

The Baltimore Ravens also added linebacker Terrell Suggs from the Physically Unable to Perform List today.  Suggs played college football for Arizona State University, and was recognized as a unanimous All-American. The Ravens selected him with the tenth overall pick in the 2003 NFL Draft, and he is now the team’s all-time leader in sacks with 106.5. Suggs is a six-time Pro Bowl selection, a two time All-Pro and was the NFL Defensive Player of the Year in 2011.