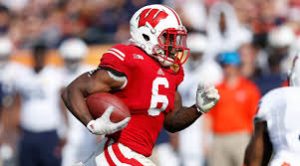 Corey Clement is a RB who has enough talent to be drafted, but his injury history will be a factor.

Standing at 5’11 and weighing 219 LBS Clement is a back who has good speed, he often makes a cut and then out runs his opponents. He has good field vision, identifying the correct lane and also the patience to allow his blocks to be set up. He doesn’t run with great power, but it is good enough and can improve. Clement is mostly a “one cut style” runner, finds his lane and make his cut, then goes. He also has good change of direction and cutting ability. He is a good receiver out of the backfield, and is a decent pass blocker when asked to do so. In 2014 Clement backed up Melvin Gordon carrying the ball 147 times for 949 yards, and 9 TDs. In 2015 he was slated to be the starting back, but he suffered a groin injury right before their first game, shortly after he then suffered a sports hernia and missed the rest of the season. Clement will have to prove that he’s recovered from his injuries, and that he can stay healthy. If he can do that, and be a productive player he could end up as one of the top backs in the draft. If he gets injured, or takes a step back in production then I would say a mid to late round pick.

This post was written by Lijah Spencer. He is one of our NFL Draft Scouts at NFL Draft Diamonds. Make sure you follow him on Twitter @Tweaked74