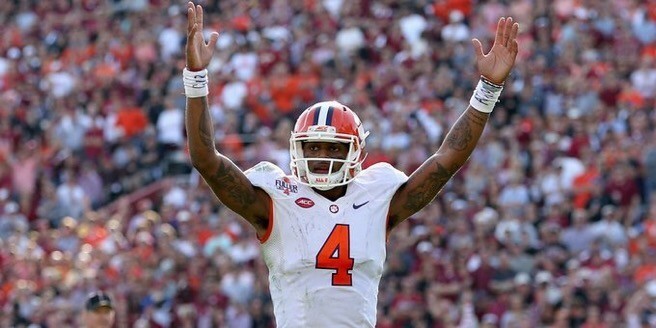 The 3rd place vote getter for the 2015 Heisman trophy, Deshaun Watson looks to top that list in the 2016 season. Coming out of high school, ESPN had him ranked as the #1 dual-threat QB and he has certainly lived up to the hype. The lean framed, big armed QB is looking to lead his Tigers to back-to-back College Football Playoffs. After narrowly losing to the Alabama Crimson Tide last year, Watson is hoping he and his teammates will hoist the trophy this season. With above-average arm strength and the ability to make plays with his legs, Watson fits the new mold of NFL quarterbacks. He can take his game to the next level by showing improvements in a few areas: going through his receiver progressions, showing better presence inside the pocket, putting more touch on the ball on short and intermediate routes, and using his eyes to manipulate defensive backs. The positives that Watson possesses are what makes him a candidate for the #1 overall pick in the 2017 NFL Draft: elite athleticism, the ability to makes throws to all parts of the field, a viable option in the zone-read, and the mental make-up to be the face of an NFL franchise.

This piece was written by Jonathan Joyce. He is an amazing scout for Draft Diamonds. Follow him on Twitter!!