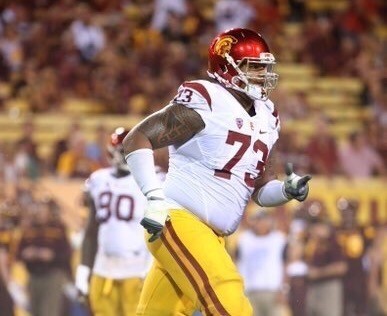 1) He is an incredibly large man

3) Plays out of balance at times

Zach Banner is the son of 11 year NFL vet Lincoln Kennedy. He is a giant of a man standing at 6’9 and weighing 360 pounds. He is a mauler up front, and plays with very good power. He often beats his man off the snap which allows him to use his power early. Banner shows the ability to set the edge, and even to get to the 2nd level, and taking on linebackers. He uses his hands well at the point of attack, but this will need to improve. He has slow lumbering footwork which will cause him to struggle against speed rushers. He also will play unbalanced at times allowing himself to be easily beaten. Banner appears to be prone to making mental mistakes, in 4 games that I watched, he had 3 false start penalties. Banner has played mostly RT throughout his career, though he has filled in at LT at times. Banner’s size alone will bring him to the attention of the NFL scouts, his pedigree will also earn him some attention, but what he does this coming season will go a long way towards deciding his draft position. If he can clean up his footwork and his mental errors, he could warrant a high draft pick. At this point I have a mid round grade with early round potential on him.

This piece on Zach Banner was written by Lijah Spencer. Make sure you follow him on Twitter!!