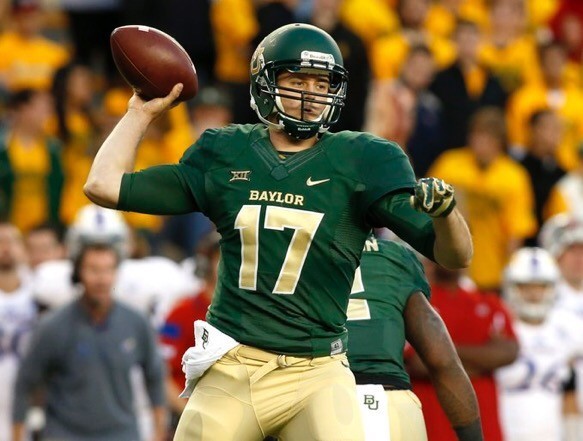 Seth Russell is a very athletic QB out of the very explosive offense at Baylor. He has the prototypical size for an NFL QB , standing at 6’3 220 Lbs. He has a very strong arm, and his accuracy is usually very good. He is athletic enough to shed would be tacklers and gain yards with his legs. He has 734 career rushing yards, and 12 TD’s. Russell shows the ability to throw on the run, though his accuracy does wane while doing this. Like most college QB’S these days, Seth Russell never Huddles. This usually results in a longer adjustment period to NFL football, where the huddle is still a staple of most offenses. Lucky for Russell, most QB’S are no further ahead of him in this regard. The Baylor offense is one of the most explosive in college football, having averaged 60 points a game last year. In 2015 Russell completed 59.5% of his passes for 2,104 yards, 29 TD’S and only 6 INT’S. His TD to INT ratio is very good, meaning he doesn’t turn the ball over. The combination of his size, his arm talent, and his athleticism will draw the attention of many NFL scouts. With another productive season, and especially if he becomes more sound in his fundamentals (which will make him an even better thrower) we may hear Seth Russell name called fairly early on draft day. At this point I have an early round grade on him.

This piece was written by Lijah Spencer. If you are not following him on Twitter you should be ashamed to call yourself a football fan!!