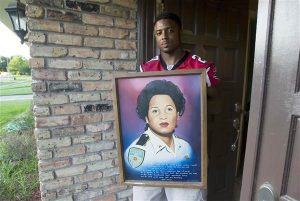 Warrick Dunn was one of the best running backs in the 2000’s and the former Florida State scat back, spoke recently at a vigil for officers killed in the line of duty in Baton Rouge. Many are probably wondering why they would have Dunn speak, but police violence is something very close to Dunn.

“It took me right back to that time,” Dunn said in a phone interview. “It was just chilling. I felt so many emotions, and my eyes were just glued to the television trying to figure out what was going on.”

“There’s been a lot of incidents dealing with police officers and violence. People get angry, but they don’t think about, well, this police officer may have a wife, kids — they’re not thinking about how they put food on their table,” Dunn said. “I don’t fault anyone — that’s a natural thing for people to feel when you lose someone. But we get lost in all the madness and the mess, and sometimes we lose sight.”