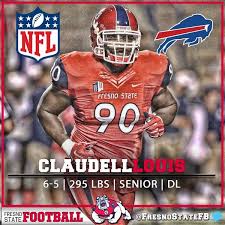 Louis moved to the United States from Haiti in 2001 and graduated from Boynton Beach Community High School in Florida in 2009. He stopped playing football after his freshman year of high school and worked a wage job at a retirement home to help his immigrant family make ends meet, before returning to the sport in college.

Louis played two seasons of junior college football before spending another two campaigns at Fresno State, where he was an Honorable Mention All-Mountain West selection as a senior in 2015.

Louis became a US Citizen back on June 2nd, 2016 along with his Mother.