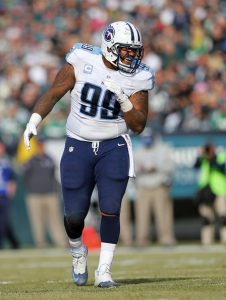 “I didn’t mess up not one order,” Casey told The Tennessean, “so that’s pretty good. I spilled a little juice on a guy’s arm, but it was all right.”

Jurrell Casey, serving at Hardee’s, says he now sees how fast food orders can get mixed up. 1st job was NFL. #Titans pic.twitter.com/HAAfSCMjvx