Study conducted says kids under 14 should not play tackle football 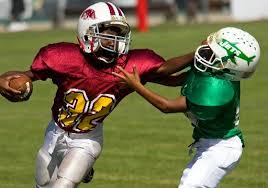 According to a study performed by the Center for Public Opinion at the University of Massachusetts Lowell, had some pretty interesting findings.  They interviewed 1000 people and the results were mindboggling, when it came to tackle football under the age of 14.

85 percent of respondents said it was either “certainly true” (31 percent) or “probably true” (54%) that there is a settled science that playing football can cause CTE.

I want to know what you think? Should kids under 14 be playing tackle football?