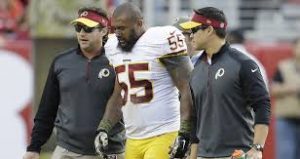 Hayward was entering his ninth season in the NFL, and was recovering from a torn ACL he sustained last year. He had been signed to the Redskins three years ago to anchor their special teams.

Signed to a three-year, $3 million deal ahead of the 2014 season, the special teams ace landed on I.R. in November of 2014 and then missed all of last season with a torn ACL.