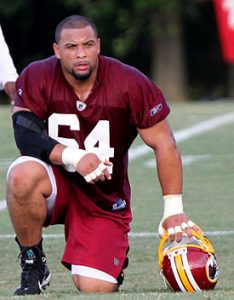 Roger Goodell has a lot of power in the NFL, and one player spoke up about that today.  Kedric Golston the Redskins pass rusher told the MMQB that he and his fellow players have their issues with Commish, but the issues can be traced to what the players agreed upon to end the 2011 lockout.

“But here’s the big problem with complaining about the rules as an NFL player: We agreed to it,” Golston writes. “What Goodell gets wrong in the eyes of many NFL players, and fans of aggrieved teams and favorite players, can often be chalked up to what we as players agreed upon in the collective bargaining process in 2011 during the lockout.”

Golston talked about the biggest issues with the past CBA below: