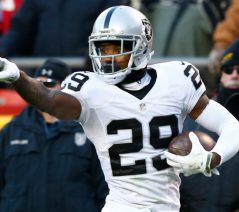 Raiders are happy their cornerback David Amerson has matured.

“Once I got here, I matured,” Amerson said, via the San Francisco Chronicle. “I came in the league and I was 21 years old. … I was taking that transition of becoming a professional [for granted] … Compared to when I was in Washington, instead of going home and playing video games all night and stuff like that, it was a much different approach. … It’s really just the little stuff. That’s what football is; it’s a game of inches. It just gave me that extra beat that I needed on Sunday to make plays out there. Like I said, it wasn’t rocket science. I knew what I had to do and it just clicked for me at a time where, like I said, I was being released and coming here. I’m kind of glad it happened like that.”

The Raiders should be happy that Amerson did mature, because he was a beast last season.