Patriots only have 2 minority coaches working on their staff; Least in the NFL 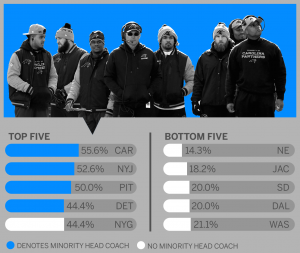 People hate the New England Patriots because the win, but now people will likely hate them because they are the least diverse football team in the NFL. Bill Belichick’s staff of 14 coaches includes just two minorities, meaning the Patriots have the NFL’s least diverse staff, according to ESPN. Those numbers do not include strength coaches and other non-football personnel.

There are some pretty interesting numbers in this report:

The NFL needs to do something, because this is pretty insane. We need to get better as a country period, and this doesn’t help.