Is LeGarrette Blount on the chopping block in New England? 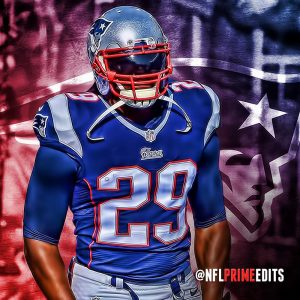 Patriots RB LeGarrette Blount could be out in New England

Last  year the New England Patriots turned to LeGarrette Blount after Dion Lewis went down with a knee injury.  Now a year later, the big back Blount could be  on the chopping block.  According to ESPN’s Mike Reiss, there is a possibility that Blount might not make the final 53-man roster out of camp.

“Running back LeGarrette Blount’s return from a season-ending hip injury, suffered in December, bears watching as it relates to his roster status,” the Patriots beat writer reported. “Blount, who signed a modest one-year deal as a free agent to return in 2016, didn’t practice in the spring. If he returns to full health and runs hard like he did at times in 2015, there shouldn’t be any issues. But that isn’t a given based on the present snapshot.”

New England did sign veteran Donald Brown in free agency, but he’s unlikely even a short-term option as a consistent producer. Brown, 29, averaged just 3.5 yards per carry in his final two seasons with the San Diego Chargers.