Geno Smith says he is pissed that Ryan Fitzpatrick returned; Oh No Trouble in the Big Apple? 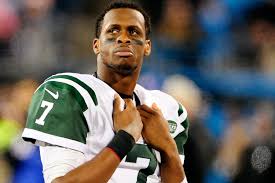 Geno Smith was the New York Jets starting quarterback up until two days ago. That was when the Jets re-signed Ryan Fitzpatrick to a one year deal worth 12 million.  What does that mean for Geno?  That means he is back on the bench, and he is not happy about it.

“I’m not disappointed. I’m kind of pissed off, but it’s not a detrimental thing,” he said, via Rich Cimini of ESPN.com. “It’s not something where I’m pissed off at anyone, because we all want to be in there. … This just adds fuel to the fire, but not in a negative way.

Smith did say he didn’t want his frustrations at losing the starting job to become a distraction, but he is in New York.

“I don’t want to be a headline because it’s not what I’m trying to say,” Smith added. “It’s more as a competitor, as a quarterback, knowing what I’m capable of and really believing in myself, knowing the work I put in. You want to be out there, but you have to play with the cards you’re dealt.”

You cannot say things like this in New York and not have blow up.  This will be fun to watch.