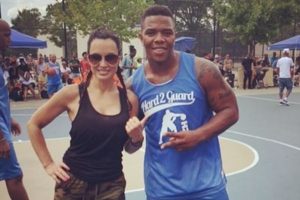 Media loves to make up a headline when it comes to Ray Rice or anything that involves drama. This past week there have been headlines that the former Ravens running back was sleeping with former adult actress Lisa Ann.  Well Lisa Ann snapped after the rumors began spilling out, and she told everyone to give her and Ray a second chance at life.

“We met, we took a photo, that was it,” Ann said. “I will tell you, I’ve been attacked by racists over the past 48 hours. I’m taking a no-social media day because I had to block over 1,000 people yesterday. I cannot believe the intensity of hate and racism directed at me because I did a charity event and took pictures with people.”

Ann said she is tired of not being shown respect because of her former career.