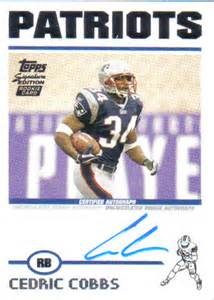 I understand the NFL is a tough sport, but come on this is getting out of control.  According to Linda Satter of the Arkansas Democrat-Gazette, former Patriots draft pick Cedric Cobbs avoided jail because his lawyer told the judge he is believed to be suffering from chronic traumatic encephalopathy from his days playing football. Cobbs’ lawyer said he’s been treated at a California clinic which specializes in sports-related brain injuries, and that reports from the center showed he was making progress.

Cobbs told the judge Thursday that his divorce and inability to provide for his family after his short NFL career led to depression.

“I became desperate. I became angry,” he said. “I felt that I was pretty much out here alone, . . . with no one showing me direction. I felt invisible.”

I am not sure I can see how that makes you run a prescription drug ring?