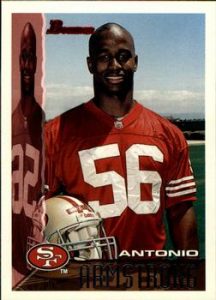 What is going on with the world today?  There is so much violence, but this is just wrong.  According to multiple reports, former 49ers linebacker Antonio Armstrong and his wife were shot and killed by their teenage son in their home on Friday.

Police were called to the Armstrongs’ home around 1:30 a.m. in response to shots fired, the Houston Chronicle reports. Daun Armstrong died at the scene and Antonio Armstrong died in the hospital a few hours later. KTRK reports that the couple’s 16-year-old son has been charged with murder. The couple’s two other children were at home at the time but were not harmed. according to Pro Football Talk.

Antonio Armstrong was an All-American linebacker at Texas A&M and a sixth-round draft pick of the 49ers in 1995. He played briefly for the Dolphins and Rams and then spent four seasons in the Canadian Football League.