Emmanuel Sanders says he wants to be a Bronco; Not looking to break the bank 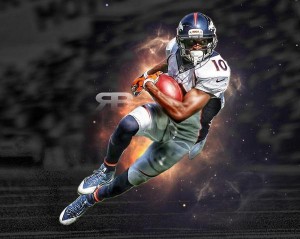 The Denver Broncos and Emmanuel Sanders were gaining steam on a new deal, but the two sides were put on standby while the team tried to lock up Von Miller. Now that Miller is locked down long term, the Broncos are focused on getting Sanders signed.  According to Sanders, the two parties are trying to find middle ground, and Sanders himself is not trying to break the bank.

“It’s not frustrating. It’s actually a blessing,” Sanders said, via Nicki Jhabvala of the Denver Post. “We’re talking millions and millions of dollars that I can earn just by the game that I love. At the end of the day, I’m looking forward to it, but I know you guys want to know the answers to that, where are we at.