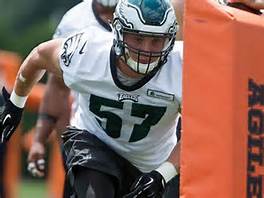 He was an undrafted rookie with size (6-4, 255) and talent, available after the draft because he was coming off a late-season right ACL tear at Washington State. Long went on to spend 2013 on the Eagles’ practice squad, setting him up as a first-year player in 2014, under the NFL’s rules.

But in the fourth quarter of 2014’s final preseason game, with a job as the Birds’ top sub linebacker and a core special-teams guy pretty much wrapped up, Long tore his left ACL. He spent that season – his first in the league, by the NFL’s reckoning – on injured reserve.

Last year, camp was just getting started when it happened again, the freshly healed left ACL tearing Aug. 3, the second day of full-squad practices. Today he was released, which means his knee may not be one hundred percent.