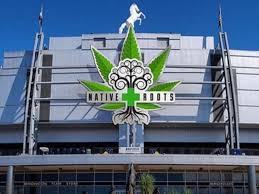 The Denver Broncos are the Super Bowl Champions, but they are having a hard time selling the rights to their stadium name.  Sports Authority was the owner of the stadium name, and they want to sell the rights as part of its bankruptcy proceedings, but the Denver Business Journal reports that Sports Authority has repeatedly extended the deadline to bid on stadium naming rights because no one is coming forward to bid.

According to Pro Football Talk, the Metropolitan Football Stadium District says Sports Authority doesn’t have the right to sell the stadium name without the District’s permission.

There is one company that has publicly come forward offering to pay for the rights to name Mile High Stadium is Native Roots, a legal marijuana dispensary, but will the NFL grant the sale to a weed spot?

I would like to see it happen, but who knows.  For the time being the Broncos will have a hard time playing at Sports Authority Stadium when the company is going under.