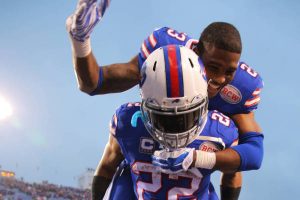 Aaron Williams wants his friend Fred Jackson back in Buffalo

Right now the Buffalo Bills are down a running back with Karlos Williams being suspended and they have been looking at other veteran running backs around the league like Reggie Bush and Joique Bell.  While those would be stop gap options, there is one guy that was near and dear to the city of Buffalo and that was Fred Jackson but the 35 year old back still has not been picked up.

Last night on Twitter, Aaron Williams the Bills safety and the best friend of Jackson took to Twitter to get the BillsMafia involved to bring back #22 to Buffalo.

#BillsMafia RT if you think we should be signing @Fred22Jackson back. Fav. if it’s ridiculous that it hasn’t happened yet #MakeItHappen

As a diehard Buffalo Bills fan, I am with Aaron Williams.  Jackson is a great player and a great person. He represented the city of Buffalo better than many.  He can help with the younger backs as well.