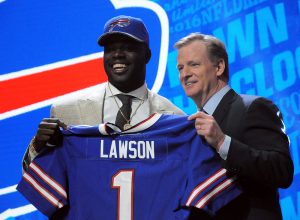 Bills first round pick Shaq Lawson has signed his rookie deal, but he could miss the entire season

When the Buffalo Bills drafted Shaq Lawson in the first round they knew he had shoulder issues, but now the team could be without their first round pick for the entire season.

According to Louis Riddick of ESPN, Lawson could miss 1/2 the season and up to the entire 2016 NFL season.

. @LRiddickESPN just said on @WGR550 he’s hearing Shaq Lawson could miss at least 1/2 season “and maybe the whole season.” However….

If the Bills do in fact lose Lawson for the entire season, it would be a huge blow.  The Bills are thin at the defensive end position.