It’s that time of year again where we begin to look at next year’s NFL Draft class. In this series of scouting notes we will look at players both from the big schools as well as unearthing some quality small school talent. Tonight we look at a QB who was highly touted, but has fallen in the eyes of some.
Gunner Kiel (QB) 6’4 208 lbs, University of Cincinnati. (RS Senior) 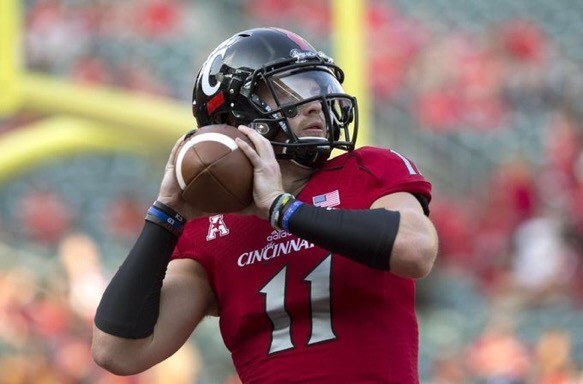 2) Has a good strong arm and can make all of the NFL throws.

3) Fairly mobile QB who can gain some yards with his legs.

4) Not afraid to stand tall in thee pocket and take a hit to deliver the ball.

2) Has inconsistent accuracy due to not squaring hips or stepping into throw.

3) Plays mostly out of shotgun, which usually translates to a longer adjustment period to NFL offenses.

Gunner Kiel is an interesting prospect at QB. He has the size, and the arm strength to make any NFL throw. But his accuracy is inconsistent, mainly due to inconsistent fundamentals. When he drops back clean, sets his feet, and steps into his throws, his accuracy is pretty good. But too many times his fundamentals fail him, he will throw off from his back foot, or from a position causing him not to square his hips to his receivers. Kiel is a fairly mobile QB, showing ability to both extend plays and also to gain yards on the ground. In 2014 he played 13 games, and threw 31 TD’s to only 13 INT’s. However in 2015 he played 10 games and only threw 19 TD’s to 11 INT’s. He did have a completion percentage of 65%, with an 8.8 yard average. Kiel was once thought of as having the potential to be a high draft pick, but to this point he hasn’t shown enough to warrant that. He will need to use this season to clean up his fundamentals, and raise that TD number in order to make a case for his being a high draft pick. If he fails to improve upon his play he likely would be considered a mid to late round pick and a developmental QB.