Today we look at one of the QB’s who will likely dominate most of the early draft chatter on tv. 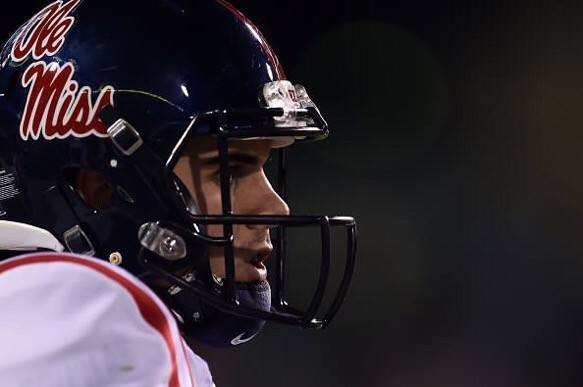 1) Has a very strong arm showing the ability to make NFL caliber throws.

2) Is a “dual threat” QB. Very mobile showing both the ability to gain big yards with his legs, as well as rolling out in the pocket and throwing on the run.

3) Has good deep accuracy when he sets his feet properly.

1) Plays mostly in shotgun, will have to adjust to huddling up.

2) Has a tendency to take too may risks with the ball. Plays with a “gunslinger” mentality.

3) As with any QB who will run this much, there will be an injury concern with Kelly. Can he withstand taking hits from NFL linebackers?

Chad Kelly is a very interesting prospect at QB. Standing 6’2 and 215 LBS he is average size for an NFL QB. He has one of the strongest arms in this year’s draft, and shows good deep accuracy when he uses proper fundamental and sets his feet, squares his hips…etc. But possibly the most exciting part of his game is his athleticism. He is a dangerous dual threat QB, with the ability to gain yards with his legs. He rushed for 500 yards and 10 TD’s last season. His mobility also aids him when rolling outside of the pocket, showing the ability to either pull it in and run, or to make an accurate throw down the field. Kelly could be considered a “gunslinger” by many, and generally does have a tendency to take too many chances with the ball. It hasn’t really hurt him in college, but NFL defenses will turn those risky throws into interceptions. Chad Kelly completed 65% of his passes last season, throwing for 4,042 yards 31 TD’S and 13 INT’S. He is the nephew of NFL hall of fame QB Jim Kelly. If Kelly has another productive season, improves upon his fundamentals, and especially if he can get some of those chance taking habits coached out of him, I would expect to see him be in the conversation as the top QB in the draft.