Von Miller was offered a 114.5 million dollar deal but he is not happy with it 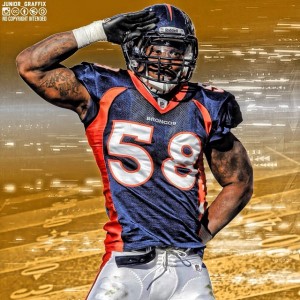 The Denver Broncos offered Von Miller a bookoo amount of money, but the man turned it down.  According to Mike Klis of KUSA, the Broncos had set a 10 p.m. deadline on Tuesday to reach a long-term contract agreement, which passed without resolution. In response to that, the Broncos have withdrawn their formal offer.

Not to say it can’t get done, but it will be very difficult for Denver and Von Miller to reach long-term agreement by July 15 deadline.

According to Lionel Bienvenu of KMGH ABC 7 in Denver, Miller is seeking close to $60 million guaranteed in his first three years, which could be the hold up.