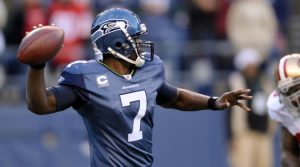 Seahawks quarterback Tarvaris Jackson could be back soon

The Seattle Seahawks cannot go into the regular season with only Trevone Boykin as their back-up. According to Bob Condotta of the Seattle Times, the Seahawks have not ruled out re-signing veteran quarterback Tarvaris Jackson.

Trevone Boykin appeared to be a clear number two last week behind Russell Wilson (and ahead of Jake Heaps), and turned in a few plays along the way that seemed to reinforce the team’s apparent growing confidence in him. But pro sports is all about doing it again and again and again and Boykin will remain under a watchful eye throughout the off-season, and particularly for as long as Tarvaris Jackson remains unsigned (and here’s your friendly reminder that Jackson also was unsigned throughout OTAs last year, so it wouldn’t break precedent for him to still sign on on at some point).

The Seahawks would be crazy to go into the season with the former TCU quarterback as their long back-up.