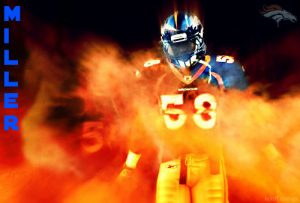 Von Miller and the Broncos are beefing over his contract

According to Charles Robinson of Yahoo Sports, Von Miller could sit out the entire year and force the hand of the Broncos.  If the Broncos do not have Von Miller, this could be a pretty ugly season for them.

The contract impasse between Miller and the Broncos took a seemingly personal wrong turn in the past 48 hours, so much so that the two sides can’t seem to agree on who triggered it. Miller rejected a six-year, $114.5 million deal at some point between Monday night and Wednesday morning, according to the Broncos. Sources close to Miller, however, told Yahoo Sports that the player actually accepted two significant parts of Denver’s offer on Monday night: specifically, the length of the contract (six years) and the overall money ($114.5 million).

Along with that acceptance, Miller’s representatives requested a continuation of negotiations on the overall structure of the deal, including how much money would be guaranteed. Within that acceptance appears to be a concession of sorts, too. Miller was believed to be seeking more than $22 million per season. The overall money that he accepted from Denver is slightly over $19 million per season.

Miller could sit out the upcoming season, forcing the Broncos to apply a non-exclusive franchise tag next offseason. In that latter route, Miller could then negotiate and sign with other NFL teams, with the Broncos being awarded a first- and third-round pick if they choose not to match the offer.