Did teams only interview Lions DC Teryl Austin for their HC job because he was black? 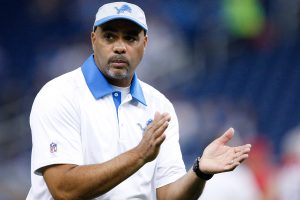 Lions defensive coordinator had four job interviews but how many of them were seriously interested?

The Detroit Lions have a very solid defensive coordinator. His name is Teryl Austin, and he was interviewed by the Giants, Browns, Titans, and Dolphins during the off-season, but was he only given an interview to satisfy the Rooney Rule?

Austin talked to Dave Birkett of the Detroit Free Press, and when he was asked if he felt that only two of the four teams had legitimate interest.

Austin would not comment on whether or not he thought it was because he was black, but he did say this:

“Take it however you want,” Austin said.

Let me ask you a question, do you think the only reason he was interviewed was to follow the policies and procedures?