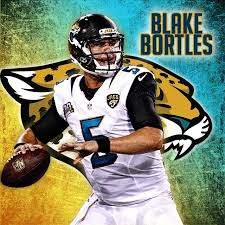 Blake Bortles is growing as a quarterback, and people are beginning to praise him

If we go back and look at the Buffalo Bills/Jacksonville Jaguars game in London last year, you would have seen the work of art by Blake Bortles in his 2 minute drive.  The man looked like a pro’s pro as he shredded the Bills defense to score a touchdown with moments remaining. The coaches in Jacksonville have watched film and feel they need to implement more of the no huddle offense for Bortles.

“When we evaluated the end of the season, we thought one of the things Blake was pretty comfortable with was our two-minute package so we’ve incorporated (more) of that,” Olson said, via the Florida Times-Union.

Bortles attempted less than 40 passes without a huddle, but threw two touchdowns to no interceptions.

“He’s getting better,” Olson added of Bortles. “(We’re) excited right now where he’s at mentally and where he’s at physically. It’s been a good five days of OTAs for Blake. He’d be the first guy to say he’s not there yet, but he’s certainly miles ahead of where he was at this time last year, which is to be expected.”