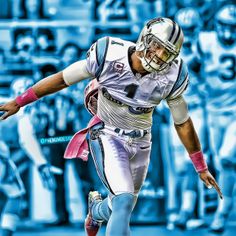 Cam Newton had over 50 touchdowns last year, but will it be enough to get that ring this year?

Cam Newton is a pretty big sports fan, and with the NBA Finals underway, Cam Newton let the world know that the man down 2-1 to the Golden State Warriors and Steph Curry is a better player than the MVP.

“I still think LeBron is [the best player]. He’s 6-7, athletic, can do anything on the court. But LeBron is not on the best team. Going back to what I was saying, the power of team will always be better than the power of skill.”

Newton was also asked about the Dab, a move he began doing after scoring a touchdown that became a world wide movement.  Newton is moving on from the popular Dab.

“I have to put that aside,” Newton said Thursday on WFZN-AM’s “The Mac Attack” show in Charlotte, via ESPN’s David Newton.

I am happy the Dab is over, and agree with him on the assessment of Lebron.