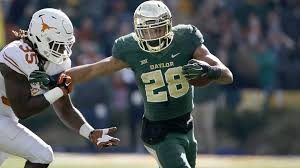 Devin Chafin has been dismissed from Baylor

Baylor has dismissed junior running back Devin Chafin, the school confirmed Wednesday. He had allegedly physically assaulted his girlfriend in 2014, according to an Outside the Lines report.

Baylor is in shambles right now, they seem to be falling apart, while their quarterback is a class act. I hope they can get it together.