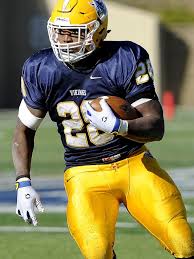 Augustana University running back C.J. Ham has been signed by the Vikings

Ham is a 6’1, 238 pound bruiser back. Ham was named All-NSIC South Division Second Team, and earned Academic All-NSIC honors. Ham also was the NSIC Glen Galligan Award recipient. He started all 12 games at running back, and rushed for a career-high 1,097 yards and 16 touchdowns. He tied the single season record for rushing touchdowns (16) and led the NSIC in rushing touchdowns and yards. Ham became just the fourth running back at Augustana to rush for 1,000-plus yards in a single season.

The Vikings are stacked at running back but Ham could get some great film from this opportunity.

To make room for him on the roster, they waived safety John Lowdermilk, who is the son of former Vikings center Kirk Lowdermilk.