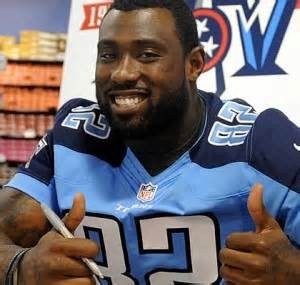 Delanie Walker wants the rookies to respect the vets

Delanie Walker the Titans tight end has been pretty amazing over the past several years.  He has developed into one of the league’s best pass catching tight ends.  He is also a leader of the Titans locker room.  When he was interviewed by the Tennessean, Walker talked about his problem with rookies thinking they deserve respect from day one.

“You’ve got to earn the right,” Walker told the Tennesseean. “These rookies come in nowadays, stuff’s given to them. I’m not going to be your friend until you make the team.”

Among the rookies virtually guaranteed to make the Titans roster are early round picks Jack Conklin, Kevin Dodd, Austin Johnson, and Derrick Henry. A couple already have impressed Walker.

“I’ve been sizing up Henry, man, and he’s a big dude,” Walker said. “I have to put him in his place early. But he’s a good dude. I’m just messing with him, giving him a hard time because I feel like he’s going to be a monster for this team. I usually don’t talk to the rookies until they make the team. But he’s one of the guys that I think can help this team out.”