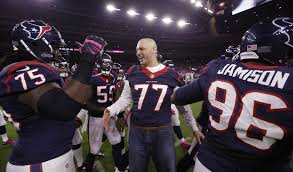 Ian Rapoport of NFL Media reports that the Texans have waived OL David Quessenberry with a Non-Football injury designation on Tuesday. Quessenberry, 25, is a former sixth-round pick of the Texans back in 2013.

Quessenberry has battled non-Hodgkins lymphoma for the past two seasons.

He endured months of intensive chemotherapy treatment and radiation therapy.

The offensive lineman spent the past two seasons on the non-football illness list, receiving the good news last year from his oncologist that his cancer was in remission.