Which teams could put in a waiver claim for Zach Mettenberger? 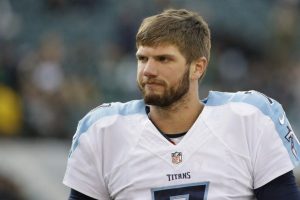 Yesterday, Zach Mettenberger the former Tennessee Titans quarterback was released and will now have to clear the waiver wires to sign anywhere.  There are several teams that could honestly use a quarterback as a back-up option, and I think these teams in the waiver wire order could place a waiver claim for his services. The waiver wire claims are determined by the draft order of the 2016 NFL Draft pre trades.

Tennessee would technically have the first pick, but since they released him I doubt they would take a shot on him.  We are going to go down the list of teams that could put in a waiver claim for him.  We will just put the teams that we think could put in a claim.

San Diego Chargers #3 – This is the team I think that ends up with Mettenberger, because of Ken Whisenhunt.  They currently have Philip Rivers and Kellen Clemens.  Let’s face it Mettenberger is way better than Clemens.

Dallas Cowboys #4 – The Cowboys have Tony Romo and then Kellen Moore and Dak Prescott fighting for the back-up position. I think Mettenberger is better than their second and third options.

Miami Dolphins #8 – Ryan Tannehill is not proven and Matt Moore is not very good.  I think Mettenberger could be an upgrade as a back-up.  He would at least make it interesting for the third spot.

New York Giants #10 – We all know that Eli Manning is the starting quarterback but why not give him a solid back-up. They have Ryan Nassib and B.J. Daniels. I think Mettenberger would be a good fit in NYC.

Detroit Lions #16 – The Lions have Matthew Stafford and Dan Orlovsky and Mettenberger may be better than Orlovsky.

Atlanta Falcons #17 – Falcons have Matt Ryan and Matt Schaub and they could definitely use Mett.

Here are a couple others that could use the big gunslinger from LSU.