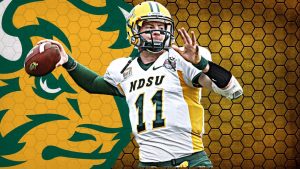 The Philadelphia Eagles gave up quite a bit to trade up and land North Dakota State University quarterback Carson Wentz, but they are playing the odds.  There are some very good odds around the NFL when you look at small school quarterbacks taken in the first round.

Since 1979 five quarterbacks have been drafted in the first round who did not play in the FBS. Those players were Phil Simms (Morehead State), Ken O’Brien (UC Davis), Steve McNair (Alcorn State), Joe Flacco (Delaware) and Carson Wentz (NDSU). 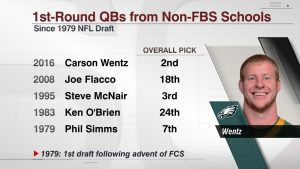 Ken O’Brien was the only one that did not win a Super Bowl or make it. While he did not make it to the Super Bowl he did lead the Jets to the playoffs three times during his prime.

So what will Carson Wentz have up his sleeve in the NFL?  I would say this much, I like his odds.  He has a 75 percent chance of making a Super Bowl, and a 100 percent chance he will lead his team to the playoffs.  Remember the name folks, he is special.