Could Sam Bradford retire, just to get his way in Philadelphia? 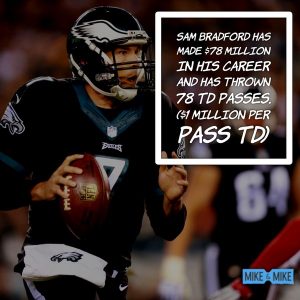 The Eagles need to cut Sam Bradford, but could he retire before they get an option

Sam Bradford the quarterback of the Philadelphia Eagles have already discussed his displeasure with the team, after the team traded up to the second pick to draft Carson Wentz. Well according to Reuben Frank of the PhillyInfluencer.com, Bradford could be contemplating retirement.

“I think he’s gonna retire, honestly,” Frank said of Bradford, via PhillyInfluencer.com. “The guy’s made what, what did we say, $95-$100 million.

“Easy come, easy go. I think he’s gonna retire. I think he’s had enough. I don’t think he wants to be here. Honestly, I don’t think anybody else wants him. Maybe you get a 3 or 4, but I doubt it. I think it’s done. I think it’s over with. I think Chase Daniel starts your season, plays five or six games, whatever Doug Pederson played,  I think it’s seven. And then Carson Wentz comes in and he’s your quarterback for the next 10 years. And this time next year, we’re sitting here saying, “Sam who?”

If you think about it, Carson Palmer did the same thing, and it worked well for him. It made him available for a trade, which could be a great option for Bradford if he does want to do it.  I just feel that whoever trades for him will have to deal with some harsh critics.