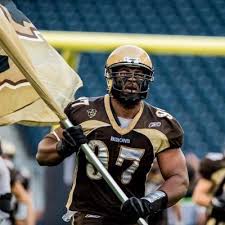 Onyemata, was selected by New Orleans in the fourth round (120th overall) out of the University of Manitoba. A 6-foot-4 inch, 300-pound native of Lagos, Nigeria, he appeared in 37 career games, finishing his collegiate career with 166 tackles, 9.5 sacks, two passes defensed, one forced fumble and one fumble recovery. He was voted a Canada West All-Star in both 2014 and 2015, and was part of the 2014 Canada West championship team.