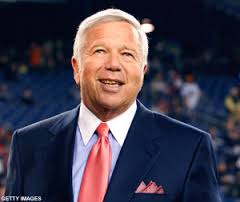 Robert Kraft the Patriots owner wrote a letter to Roger Goodell and now NFL owners seem to be upset. According to Jason Cole of Bleacher Report,  Three NFL owners expressed “extreme disappointment” with Patriots owner Robert Kraft’s letter of support for Brady. Their disappointment reportedly stems from their belief that Kraft wasn’t serious in filing the brief and instead was seeking to appease Brady and Patriots fans.

“They believe that Kraft did this as a publicity stunt,” Cole said of the aforementioned owners. “ … They don’t believe that he did this in any seriousness because it absolutely speaks to the ability of the commissioner to be able to discipline players, and it undercuts the collective bargaining agreement.

“In other words, owners believe that if Kraft really believed that this was serious, that he would not have sent this letter in any way, shape or form. And because of that, they believe it’s disingenuous on his part, and that’s why they’re so disappointed in the actions of Patriots owner Robert Kraft this week.”

Robert Kraft said his letter was in response to Goodell’s remarks that if any new facts were learned, Goodell would reconsider the punishment of a 2016 first-round pick, 2017 fourth-round pick, the four-game suspension of Brady and a $1 million fine.

“I personally believe that when the league made their decision, they did not factor in the Ideal Gas Law. They admitted that publicly. They had a full year of being able to observe Tom Brady play with all the rules of whatever the NFL was, and make any judgments there,” Kraft told reporters at the Boca Raton Resort. “We have laid it out pretty straightforward. And now it’s up for them to decide.”