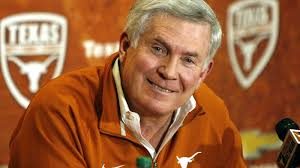 Imagine if Baylor would have hired in state rival Mack Brown?

According to Sean Adams of AM 1300 The Zone, longtime Texas head coach Mack Brown was presented to Baylor’s board of regents as an option. Mike Singletary was also given a look, but the team made up their decision quickly.

Baylor will name former Wake Forest head coach Jim Grobe to the position. Grobe resigned from his former position back in December of 2013. Grobe coached at Ohio from 1995 to 2000 and Wake Forest from 2001 until 2013. He’s one of the most respected coaches in the country.

While Grobe will take over as the coach, the teams AD will step down. According to a report from the Baylor 247Sports website, Bears athletic director Ian McCaw will step down from his post in the near future.

Oh Baylor, you have some issues.