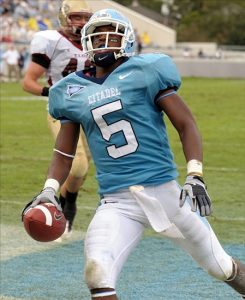 According to sources, the Washington Redskins have released receiver Andre Roberts. The Redskins drafted Josh Doctson in the first round of the 2016 NFL Draft, which made the former Citadel star expendable.  The Redskins were paying Roberts 5 million dollars to be on the roster, so this move was expected.

Roberts was drafted by the Arizona Cardinals in the third round of the 2010 NFL Draft. He played college football at The Citadel.

Roberts never really developed into a number 3 receiver like the Redskins were hoping. With the team drafting Josh Doctson it is a much better option at a much cheaper rate.