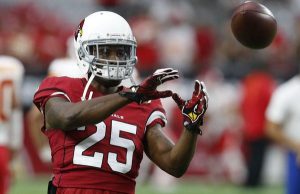 Today the Baltimore Ravens were busy. The team signed first round pick Ronnie Stanley, then followed it up by signing veteran cornerback Jerraud Powers.

The Ravens also announced they’ve agreed to terms with cornerback Jerraud Powers. NFL Media Insider Ian Rapoport reported it was a one-year contract, according to a source involved with the deal. Powers adds starting experience from Arizona to the Ravens’ secondary.